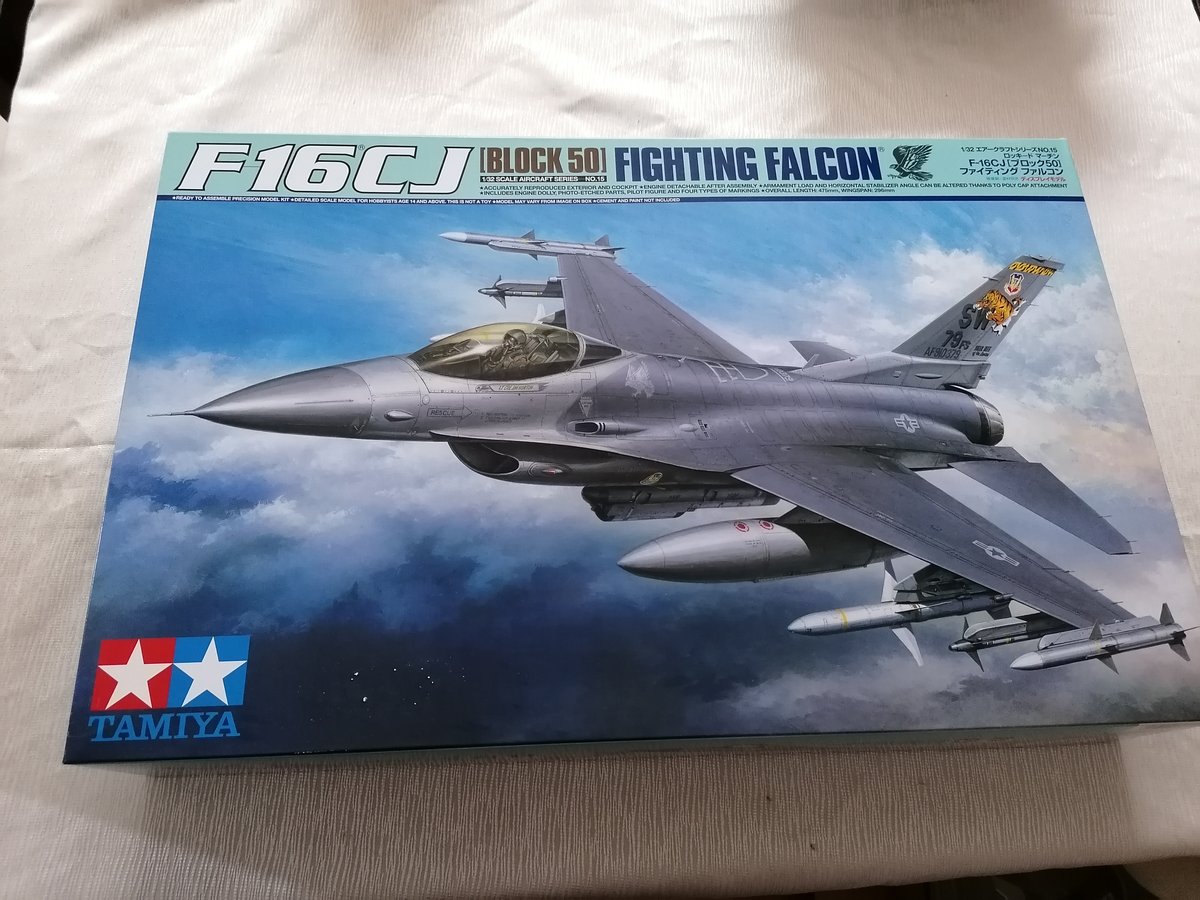 [US Air Force Masterpiece Fighter] The US Air Force F-16 was born as a small and lightweight air combat fighter, and has evolved into a powerful multirole fighter with excellent basic design and gradual improvement. In the advanced F-16C, improvements have been made to the radar and cockpit, and the engine can now be equipped with the high-power GE F110 in addition to the P & W F100. Among them, the Block 50, which was delivered in 1991, is equipped with the F110-GE-129 engine with further improved thrust. In addition, the type equipped with the operational capability of the AGM-88 anti-radar missile is called the F-16CJ, and it has become possible to perform Wild Weasel missions to control enemy air defense radar. With more than 4,000 produced, including variants, the F-16 has become one of the most successful masterpiece fighters of our time.

Over the past three years our 1/32 Scale Aircraft Series has gained a growing selection of modern military aircraft models, including the F-4 Phantom II, F-14 Tomcat and F-15 Eagle. Tamiya now proudly adds the F-16 Fighting Falcon to this distinguished lineup, offering our most detailed ever 1/32 scale aircraft model, and setting whole new standards in large-scale aircraft modeling.

Regarded as one of the world's leading jet fighters, the F-16 Fighting Falcon is currently employed by more than 20 countries, and has served in actual combat since the 1980s. The F-16CJ Block 50 variant is the newest F-16 currently being deployed to U.S. units. Major upgrades to the Block 50 included a more powerful turbo General Electric engine, AGM-88 HARM (High-Speed Anti-Radiation Missile) and targeting system. The F-16CJ is used for "Wild Weasel" SEAD (Suppression of Enemy Air Defense) missions, which include searching out and destroying radar and missile sites.

The F-16 Fighting Falcon model maintains the ease of assembly featured by all of the models in our 1/32 Scale Aircraft Series, and boasts the high level of detail and accuracy for which Tamiya is known around the world. This model has given our designers the opportunity to incorporate a number of modeling ideas and innovations that would not have been possible on a smaller 1/48 or 1/72 scale.

This is the first ever 1/32 scale F-16 model to replicate the characteristic large air intake duct, nicknamed "Big Mouth". The F110-GE-129 jet engine is also replicated in precise detail, and can slide into place on a hook and rail system exactly like the actual aircraft. The entire engine can also be displayed outside the aircraft using the included cart.

This model achieves a level of accuracy only possible in such a large-scale work. The upper surfaces of the wings are molded to the main body of the plane in one single piece, creating a "Blended Body" which artfully depicts the F-16's beautiful, streamlined form and proportions. The model features screw-mounted main body and die-cast landing gears with actual rubber tires for extra durability.

Pitot tube and static dischargers are reproduced using metal parts, and photo-etched parts are used for seat buckles, radar antenna, chaff/flare dispensers and name-plate adding to the model's realism and display value. This same painstaking attention to detail led us to include an ejector seat fitted with a moveable slide rail, just like the actual aircraft. Curved bubbletop canopy features choice of clear or smoked canopy, and can be assembled in the open or closed position. A detailed pilot figure is also included. Gun hatch and nose cone can be opened after assembly to display machine gun and radar system respectively and metal weight has been added to nose for accurate front-rear weight distribution. Featuring decals to produce up to four different versions, including tiger design used during "Tiger Meets" and markings for F-16s who flew SEAD missions over Iraq, the list of fantastic features is truly endless. Even the most fanatical aviation fan will be truly satisfied.

[Model outline]A plastic model assembly kit for the US Air Force multirole fighter F-16CJ. ★ Scale 1/32, total length 475 mm, total width 296 mm. ★ The blended wing body that creates the beautiful form of the F-16 is expressed by molding the upper surface of the main wing with the fuselage and one part. ★ The F110-GE-129 engine that characterizes the block 50 is precisely modeled. It can be attached and detached like the actual machine even after completion using the slide rail at the top of the engine bay. A dolly for mounting the engine is also included, so you can enjoy a single display and scenes of maintenance scenes. ★ A wide variety of weapons such as missiles are set. Two types of drop tanks and AN / ALQ-184 ECM A pod is also attached, and you can reproduce the weapon mounting pattern that is often seen in the F-16CJ belonging to the US Air Force. Weapons can be attached and detached and replaced by adopting a polycap stopper, and soldiers for each mission You can enjoy the difference in clothing with one machine. ★ The pitot tube on the nose and the static discharger at the rear end of each wing are made of metal, and the antenna surface of the radar and the chaff / flare dispenser are made of etching to improve the strength and texture. ★ Flaperons, horizontal stabilizers, rudders and other moving blades can be stopped at popular angles with polycaps. The leading edge flap that can be selected up and down also adds movement to the model.
The ejection seat of the cockpit has the same configuration as the actual machine attached to the slide rail and can be attached and detached even after completion. Comes with a sitting pilot doll.
Two types of canopy parts, transparent and smoked, are included.
The air brake at the rear of the fuselage can be opened or closed.
The tires are made of realistic synthetic rubber. A wheel chock used when parking is also included.
Four types of markings are available, including a Tiger Meat participant with a flashy marking on the vertical stabilizer and an Iraqi free operation participant. A masking sticker for canopy painting and a safety pin tag sheet are also included.
If you remove the weapons, canopy, and vertical stabilizer with polycap from the completed model, you can put the inner lid on the pedestal and put it in the package.

Image on the right shows specially designed packaging allowing model to be easily stored even after assembly. Once again Tamiya shows that it listens to its users, solving that terrible dilemma of how to store such a delicate, large scale model.

Detailed F-110-GE-129 jet engine can be removed from housing even after assembly. Kit includes special dolly for easy display.

Missiles are installed using poly caps, allowing them to be removed and used interchangeably.

Moveable ejection seat is fixed to a slide rail, just like the actual aircraft.